Being somewhat of a photography nut, I recently set out to buy a second camera to carry around for those times when my Canon 5D and slew of lenses would be overkill. After doing a bit of research I settled on the Canon Powershot G9, and last week I finally picked one up. So far I’ve been very impressed with the camera, but I wanted to see how it would hold up against the 5D in an unscientific yet unbiased comparison. And the results were pretty surprising. Sample photos and descriptions for the über photo geeks are below…

All photos used in the comparison were shot in RAW mode and taken as-is from the camera. The only image adjustments were some slight color temperature adjusting in Lightroom and a little uniform sharpening in Photoshop. For resizing, all the photos were downscaled only, not upscaled, to guarantee maximum image quality. Only natural light was used – no flash.

My first test was to compare the G9 with the 5D / EF 17-40mm 4.0L lens. As seen below, the photos are very similar. The G9 had slightly more barrel distortion and chromatic aberration by the edges than the 5D, but overall the similarity is impressive. 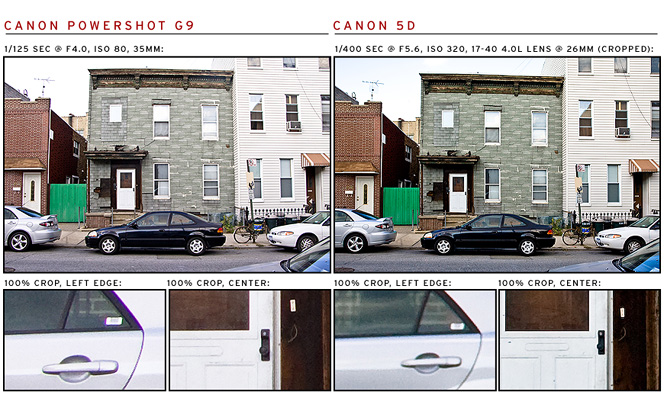 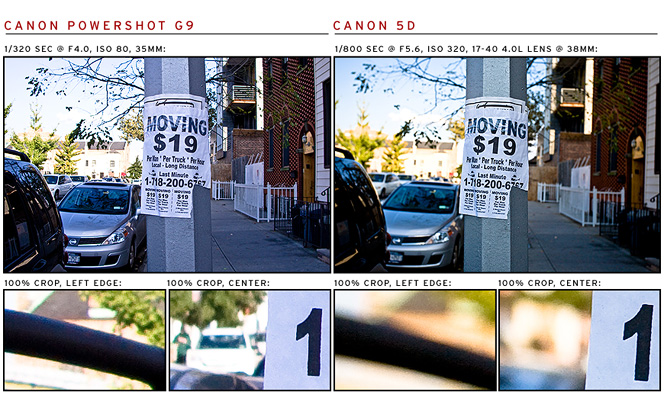 The macro capabilities of this camera really impressed me. Besides some chromatic aberration by the edges, the image quality was very similar to the Canon 5D paired with a 100mm F2.8 lens. Note the Powershot G9’s wider depth-of-field than the 5D, which by comparison is razor thin. 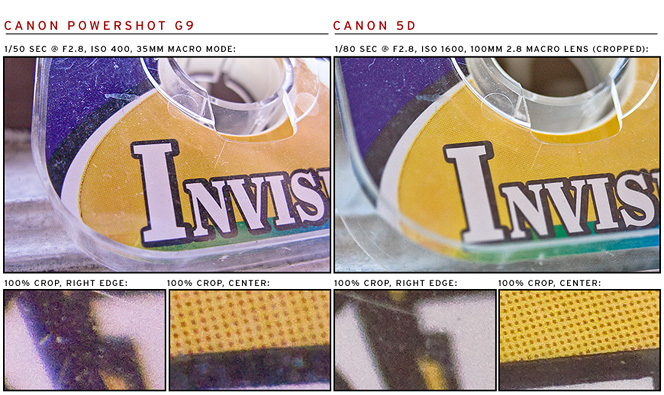 Before this test, I would have sworn that my Canon 5D, combined with the 70-200 F2.8L IS lens, would have blown the G9 out of the water. But I was wrong. The G9 held up to the 5D with aplomb. The G9 isn’t quite as sharp as the 5D, but that’s about it. It’s amazing that I can fit this thing in my pocket without being arrested for lewd behavior. I wish I could say the same for the 70-200. 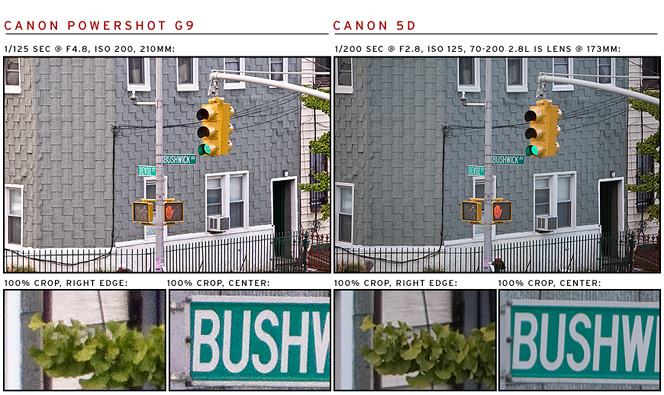 Here’s where the differences begin to show themselves. In order to get a proper handheld indoor exposure with the G9 (without using a flash), you need to crank the ISO past the 400 mark. Images on the G9 above ISO 400 get very grainy, and images at ISO 1600 are basically unusable. But if you’re shooting for the web and won’t ever need to enlarge your photos, indoor telephoto on the G9 isn’t that bad. The only bonus is that you do get a wider depth-of-field than on the 5D/70-200 @ F2.8. But with a fastest usable shutter speed of 1/25th of a second, you’re not going to be able to stop too much action with that shutter speed. 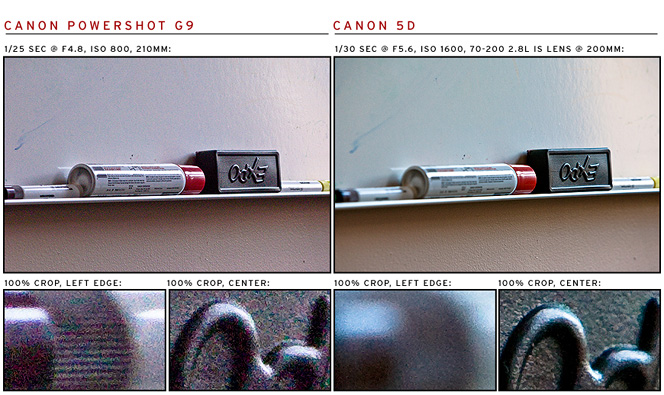 Nothing beats a good fast prime lens on the 5D, and while the G9 was able to adequately capture the image, it doesn’t have the beautiful depth of field of the 5D and the 24mm F1.4L. Take a look at the 5D’s photo and marvel at the beautiful the out-of-focus highlights by the sink. Us photographers get off on this shit. 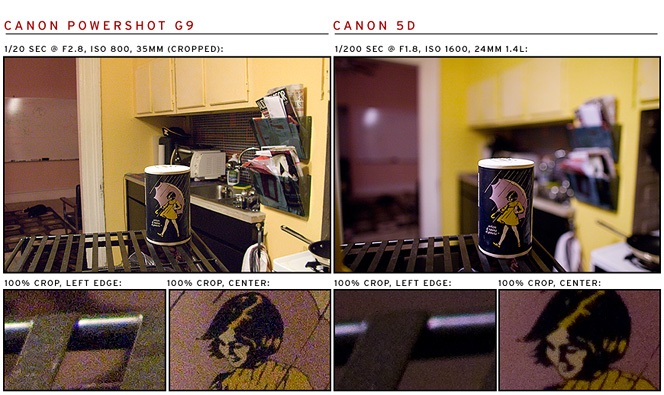 I was surprised how nicely the G9 held up to my favorite combo – the 5D and 50mm F1.4 lens. The high noise of the G9 is still a little disconcerting, but overall the images look similar when viewed small. Notice the 100% crop of the car interior and how much subtle detail the 5D captured compared with the G9. 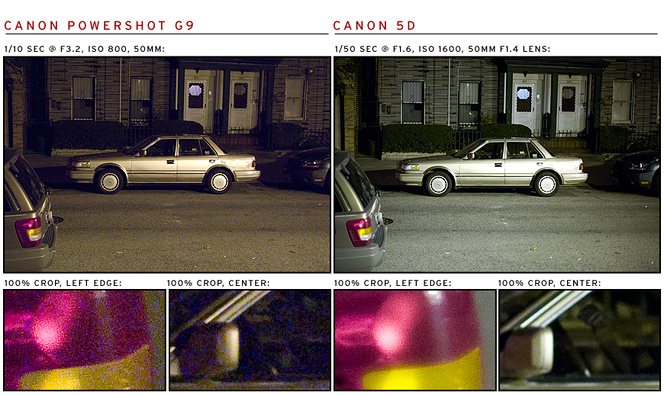 Although many of these comparison photographs look similar, it doesn’t mean the cameras are similar. These photos represent the very best photos the G9 is capable of taking, while the 5D hardly broke a sweat. In extreme photographic situations requiring low-light shooting, subject tracking, narrow depth-of-field, and fast shutter speeds, the 5D will surely best the G9. But for situations where you simply need to capture a moment, the G9 is a very impressive option – especially if you’ve been spoiled by the amazing images the 5D produces.