Any street photographer will tell you that one of the most difficult parts of photographing people is building up your balls.

Because in most societies (including ours) it’s considered rude as hell to whip out a camera and start taking a stranger’s picture without permission. Sure, there are ways around this – such as shooting from the hip, using a telephoto lens to keep your distance, or a few other tricks up the discreet photographer’s sleeve. But in my opinion, if you don’t have the balls to walk up to someone and snap their picture, then you’re doing it wrong.

Cut to today, when I’m walking through SoHo enjoying some rare free time, and low and behold I see Vincent DonOfrio sitting on a street corner outside his trailer during a break in shooting Law & Order, Criminal Intent. I had my Canon G9 in my pocket so I figured it would be a good chance to grow my balls a little bit by snapping a picture of arguably one of the most intense actors of our time. (Sure, he’s been in some crap lately, but the guy was in Full Metal Jacket. I mean, come on.)

So I stop in the middle of the sidewalk, fish out my camera, and take aim. And get this – he looks at me. And his eyes are doing more than just looking into my eyes. His eyes are looking into my soul, telling me he’s going to murder my children. My children. So I took the picture and got both the hell out of there and the heeby jeebies at the same time.

So that’s about it. Enjoy the photo below. It’s going to cost me dearly. 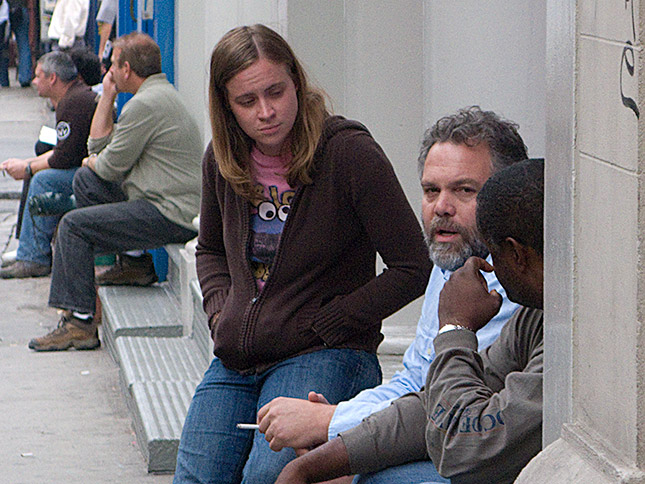