As an Apple fan, one of the greatest thrills I’ve ever had was when I emailed Steve Jobs and he wrote back.

When it happened in 2010 I debated whether to talk about it online, and decided that as personal correspondence it wouldn’t be right to publish. But now, as more and more “Steve Jobs stories” bubble up to the surface more than a full year after his death, I thought it’s worth sharing as a reminder of his persona.

Here’s how it happened. Back in the summer of 2010 I was trying to take a photo with my iPhone 3Gs and the damn thing froze. It was completely frozen – not even the home button would work. Of all the years I’ve endured a sluggish iOS experience as an early adopter, this was the first time I was holding a completely frozen iPhone. This was huge, I thought. This needed to go straight to the top.

After restarting my iPhone I opened up the Mail app and fired off a friendly complaint to sjobs@apple.com. I’d heard that Steve Jobs used that email address, but I was skeptical about whether it was actually him. But what the hell – I was just venting.

I got a response in less than one minute:

So I wrote back with an accurate description of the bug. And when I got a reply it contained an apology, but with some classic Jobsian misdirection:

Sorry. Lots of bugs fixed in upcoming software release. Plus some cool new stuff too.

Very rarely did Steve Jobs apologize for anything. In fact, he’d only publicly apologized a handful of times. So at this point I was skeptical about whether this was Jobs, so to mark the occasion (and, a little bit, to mock the PR person I thought might have been emailing me) I wrote back that I accepted Steve Jobs’ apology and that we were still cool.

In retrospect I realize this comes across as kind of dick, so for that I owe the apology. But how often have we all regretted what we’d said (or hadn’t said) in important situations? You always think of a better line when you’re walking away.

So was it really Jobs? At the time my assumption was that emails to sjobs@apple.com got filtered through some elaborate system of public relations experts, secretaries, assistants, and other Apple staffers. Maybe, I thought, a tiny portion of those vetted emails would eventually make their way into Steve’s inbox. But I assumed the majority of the Emails from Steve Jobs that were out there had been written by PR folks, or at least initially drafted by them. Why would the CEO of one of the world’s most powerful companies be responding to random customers?

But now I realize it must have been Jobs for a few reasons.

First, Steve Jobs was a control freak. Would he really allow anyone other than himself to send an email from sjobs@apple.com where it could be quoted and attributed directly back to himself? Not likely.

Secondly, the fact that I got a response in less than one minute (accounting for the 3 hour NY to CA time difference) should have tipped me off that it was Jobs. There’s no way any sort of multi-person filtering/vetting system could process and reply to my email that quickly.

And lastly, I usually subscribe to Occam’s razor: the simplest explanation is usually the correct one.

Anyone who’s curious or still doubtful can download the raw email source here.

So that’s my Steve Jobs story. It’s not incredibly exciting or informative, but I’m proud to have had an interaction with such an important man.

And every so often just for kicks, I’ll search my email for “Steve Jobs” and find this thread. For me it’s a more personal reminder of what’s true for us all; that as long as we have these slick little pieces of technology in our pockets, Steve Jobs will never really be gone. 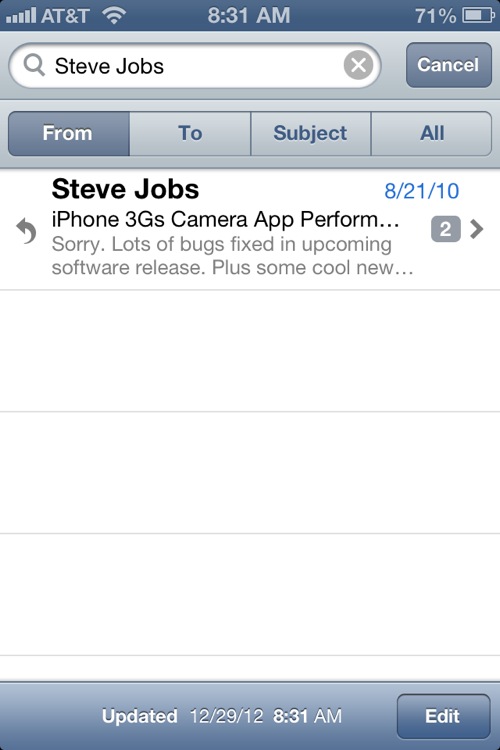