This actually looks pretty cool. (Nevermind that the playhouse is the same thing as the picnic table.) 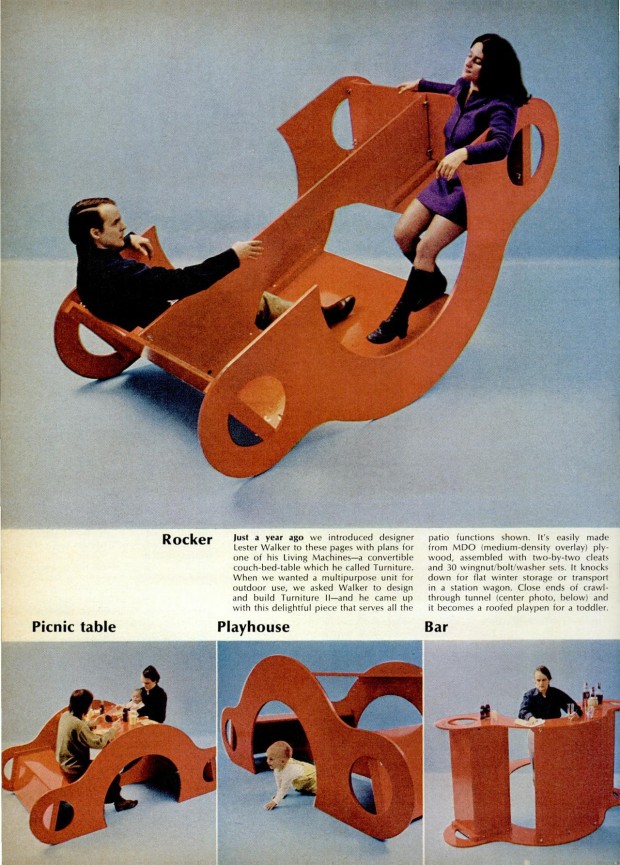 This little piece of genius is from a 1970 issue of Popular Science (Page 76).

If you ever find yourself doubting the determination and ingenuity of the human spirit, just do a Google image search for “hidden flask”. 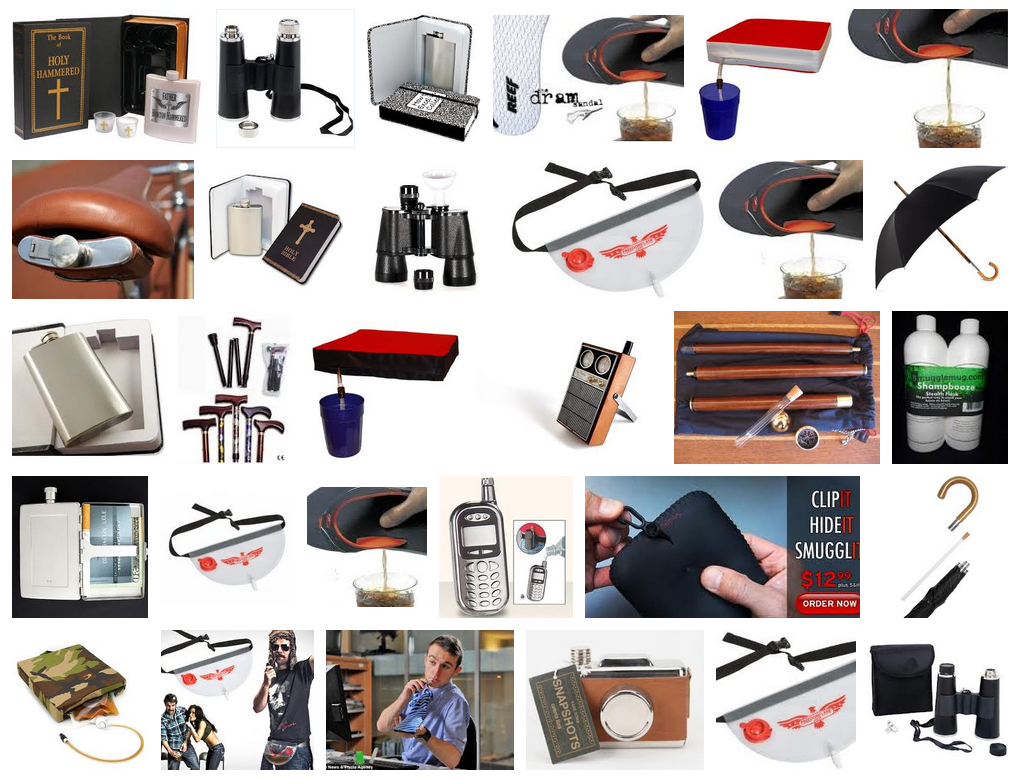 I never enjoyed bourbon until I discovered the trick to drinking it; taking it neat with tiny little sips. No ice cubes to hurry things, no mixers to obscure the flavor, just a little sip to touch the tongue and kick off a 30 second explosive yet rewarding flavor expedition of sweetness, fruit, spice, and America.

There are plenty of great bourbons out there (some favorites include Buffalo Trace, Bulliet, and Makers Mark) but tonight I’m trying some Four Roses Small Batch and it’s quickly becoming a favorite. 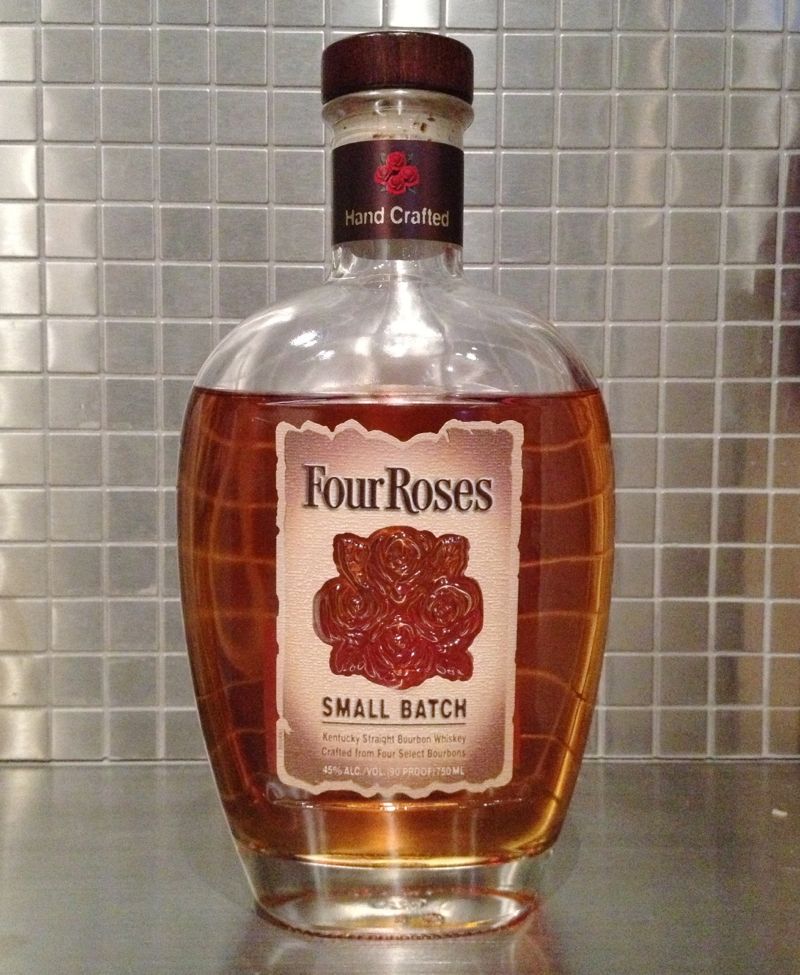 So with a baseline appreciation of bourbon under my belt, I’m expanding to appreciate bourbon reviews as well. This review of Four Roses Small Batch Bourbon from “Mike” at Bourbon Enthusiast is pretty accurate:

Taste: A rich but softly sweet fruity entry that virtually explodes at mid palate with cinnamon and pepper…….. cleansing the whole palate and leaving some heat in its wake. The spicy and sweet flavors weave a kaleidascopic profile that changes over a short time.

Finish: The mid-palate heat and spice does not overwhelm the finish as one fears. The rich barrel, grain, and fruity flavors return for an encore in the midst of some dryness, and manage to leave a buttery residue that is very satisfying. Excellent.

But he goes on…

My opinion is that this bourbon must be approached as if in slow motion. It must be allowed to unfold much as a day lily does in the morning sun. It is 90 proof but plenty potent for its purposes…….. if allowed sufficient time to accomplish them. I take those purposes to dampen the riot offered by the Four Roses Single Barrel and offer a similiar but quite different bourbon drinking experience. Both the Single Barrel and the Small Batch come on with serious intent to make an impression on your taste module. And they succeed. The Small Batch is a bit in the way of a mock charge, while the Single Barrel keeps little in reserve and goes all out. But both attacks are like those of a well trained army, with specific aims and goals. You must (my opinion) respect them on their terms or they will lay waste to you. I do not think of Four Roses Bourbons like I do any other bourbon. They (as always, my opinion only) make no allowances for new or inexperienced bourbon drinkers and demand respect and attention not often required by other bourbons. There is no better bourbon in this world than Four Roses Bourbons, and indeed, there is no better spirit in this world than Four Roses Bourbons………. it has its equals in both worlds, but nothing is better. Jim Rutledge is an American genius and he and Four Roses deserve all the accolades they receive.

Sometimes reading the reviews about the bourbon is just as satisfying (and dizzying) as drinking the stuff itself.

I don’t always do impersonations, but when I do, I prefer Dos Equis.

Check out my design for the first ever Snooth Cycling Jersey. If you work for a winery or wine merchant, speak up on the Snooth Forums and we just might include your logo for free.

Photoshop jockeys might appreciate how I simulated the stretching fabric on the back. All I needed was an iPhone, a t-shirt, a bottle of wine, and a dream. Which is coincidentally how most of my weekends begin.

I had a great time on Saturday night at Snooth’s Open That Bottle Night. I got to schmooze with some interesting people, drink some fancy-ass wine, and bust out the prime lenses. I had to underexpose and push the photos in Lightroom to get workable results, but I’m pretty happy with the way things turned out. You can download some of my Lightroom presets below, then check out the rest of the gallery at Flickr. (Fellow photo geeks may want to cringe/marvel at some of the exposure values in the EXIF data…)

One of the benefits of using a tripod and a manual camera setting for photographing wine bottles (which I often do before one of Greg‘s blind tastings at Snooth) is that it makes processing all the photos a breeze. But I’ve also found an added benefit – it lets me make some pretty kick-ass (albeit useless) animated gifs.

Want to see me tasting wine from the 1800s? Check out the hot Snooth cross-blogging action…

Geeking out on Wine 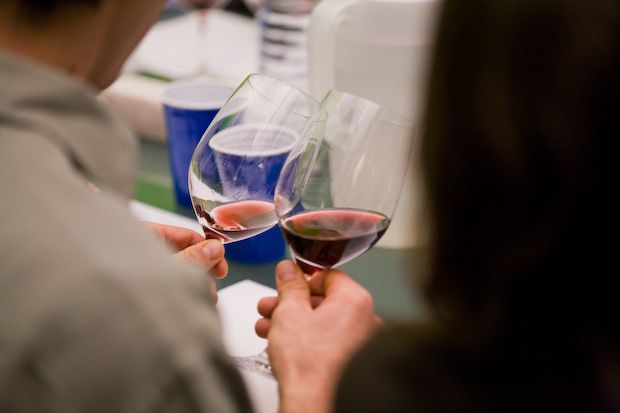 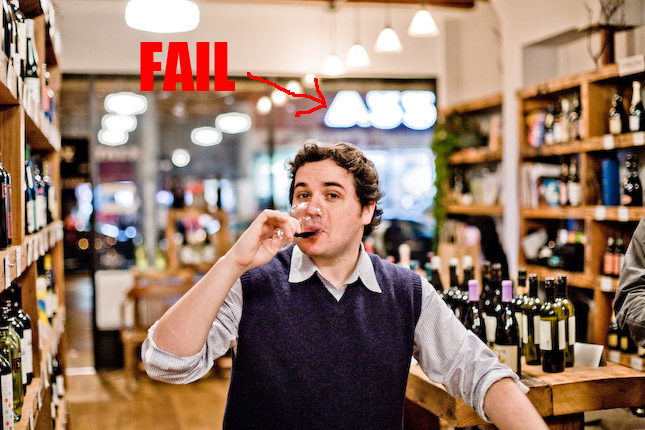 Here’s another cross-post with the Snooth blog. I promise I’ll be adding more to this site in the near future, or Snooth isn’t a made up word!

If anyone’s curious, here’s some of the stuff I’ve been up to at Snooth.

Get your Snooth on

Yesterday was a pretty cool day at Snooth. Among a slew of usability improvements we rolled out, we launched the Snooth Pulse – a real-time geographical measure of what people are searching for on Snooth. I hope you’re ready to have your mind blown.

We also added a Features page, which basically gives people an overview of Snooth at a glance, and showcases a pretty nifty video I put together. That’s right – I just said nifty.

Out with the old, in with the Snooth 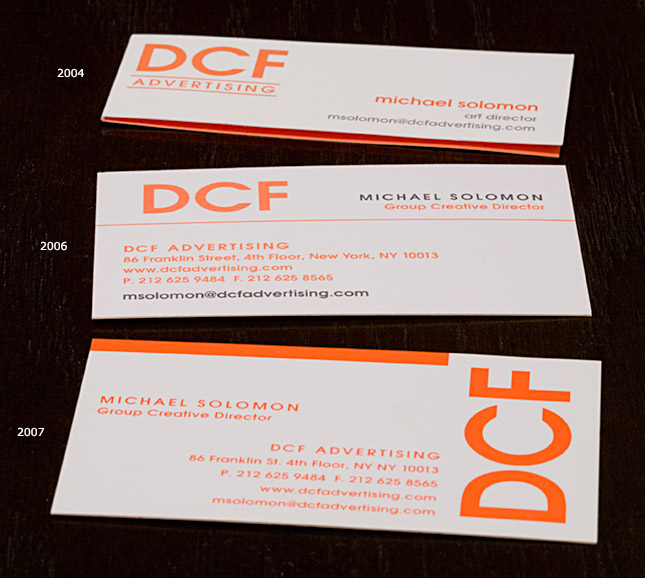 Hold on to your shoes people. Or at least tie your shoelaces very tight. Because what I’m about to tell you is going to knock your socks clean off and I don’t want your shoes flying all over the place and hitting some person in the face.

Tomorrow I’ll be leaving my post as group creative director at DCF Advertising as I transition my career trajectory from advertising into interactive and information design. So starting next Monday I’ll be settling in as the full-time web designer at my favorite website ever, Snooth.com.

I’d be remiss if I didn’t first say that the folks at DCF Advertising have been great to me for the past four and a half years. And when I told them I’d be moving on they were incredibly understanding and supportive. I’m going to miss working there. But enough with the tiny violins. Let’s talk about wine.

I’m so psyched to be working at Snooth it should be illegal. For those of you who aren’t familiar with Snooth, it’s the world’s largest online wine database wrapped in a slick interface (designed by my buddy Clint) and backed by a home-grown, extremely powerful social network and community. I could call it “Facebook for wine” but that would be a gross understatement. It’s a place where you can review wines (even if you’re a wine idiot like me), see what your friends are drinking and reviewing, and find wines close to your home. But here’s the kicker – Snooth’s magical algorithm will recommend wines for you based on what you like and dislike – automatically. So it’s a great site for people who know everything about wine and for people who know nothing about wine. Stop what you’re doing right now and create a free account and add me as a friend – my screen name is solomania9. Do it. DO IT!!!

So the bottom line is that working at Snooth will allow me to stay on the cutting edge of today’s web technology, while utilizing my passion for creating engaging and memorable experiences on the web and beyond. That’s a roundabout way of saying it’s going to be pretty fucking sweet. I’ll keep everyone posted.

Now please carry on and start picking up all the smithereens that used to be your shoes.

I hope this doesn’t offend anyone, but if you like wine and have never been to snooth.com you’re a fucking idiot.

Full disclosure – my roommate Mark is the CTO of the website. But that doesn’t make it any less awesome, and I’m certainly not getting anything in return for pimping their site. It’s just a really well-done website for learning about the wines you like and the wines you don’t. They have a pretty nifty way of suggesting wines you’ll appreciate based off of how you’ve rated other wines in the past. For example, tonight I’m cozying up with a Salmon Run Pinot Noir even though I just discovered I’m not particularly jazzed about it. So I rated it a 1.5 out of 5 (and wrote the following helpful review) and snooth’s nifty algorithm will suggest for me wines that I won’t think suck in the future. It’s both simple and brilliantly complex. Here’s the review I wrote – care of their “blog it” button that appears after every review you write.

Dr. Frank`s Vinifera Wine Cellars Salmon Run Pinot Noir 2007 (SnoothRank: 0/5)
(April 2008)
Not sure if I'm crazy about this one. It's very light, almost effervescent, but it doesn't do anything. The flavor just sits on my tongue and doesn't go anywhere or blossom into anything. Every sip would be forgettable – although that's not much help given the flashing lights in my rear-view mirror. myRating 1.5/5